Revised ‘Cycle Safe’ street design, based on having cars overtake on the outside as lack of room on inside, and some will want to overtake even though there is no need. This is very similar to Dutch model, though makings a bit different.

Idea is slow down speeds, keep cyclists a safe distance from parked cars, and provide a marked safe width to ride in. Drivers have to work around this, not expect cyclist to jamb into the back of parked cars to let them through, while only sensing them behind! 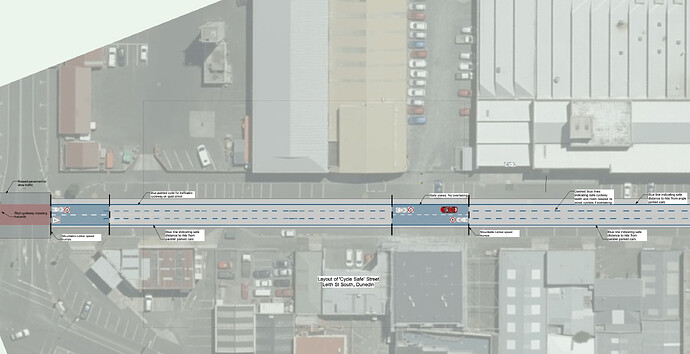 Well what an interesting concept. It took a wee bit to get my head into it but it could work well.

Much better than my hen scratching

We could also consider the idea of making the inside lane of a two lane road like Princess St a slow moving ‘Shared lane’, with markings and speed humps (Though a central protected bi-directions cycle lane would be better, it might be a good first step)

Forgive my ignorance, but hasn’t this stuff all been tried elsewhere. I just wish that I knew where and how well it went. Or even where to find out such info!

I’d love it if we became a real test-bed for this kind of stuff but we really need to know where the research is at. @tdivett?

Attached is some info on Cycle Streets. In Europe they are common and work well. Here and in the US they seam to try to do the same thing using ‘Sharrows’, but these don’t do much, as they have low visual impact, and most people don’t know what they mean! I think to work well we need to change the look and feel of the street, and have some physical changes to slow traffic, such as speed humps. Also they will only work in the right place where there is low traffic while still being a good access route for cyclists

Yes, thats what they suggest, but clearly in residential areas where these are used, that will never be the case. More important to start with low vehicle numbers to give the cycle number a chance to grow! Little through traffic, and longer term parking should keep numbers down.

How did we ever end up copying something from America that nobody understands? The Dutch have a far better way of doing the same thing that does work!

No, Really, What Are Sharrows Good For?

Maligned and misunderstood, sharrows are the cause of much frustration for cyclists and drivers alike. But they can play an important role—if they’re used correctly.