Spokes, Betterstreets and the hospital Bike Users Group attended a meeting today with members of the DCC transport team. One request from them was for input as to where people feel sycle parking should be. They are not looking for ideas in the areas covered by the planned George and Princess street upgrades, but elsewhere around town. The parking would be hoops, such as the ones on Dowling Street.

Add specific locations into this thread and I’ll make sure they get passed on.

I’ll pass on the suggestions, Thanks.

Lockable cages are an interesting one, and I’d be very interested in other people’s views. In areas where there is high bike crime I can understand their appeal, but they take up a huge amount of room. Would other deterrents, such as surveillance cameras, be a better fit for our city centre?

A more expensive solution than a cage but perhaps more elegant (and less space) is the bikeep system: 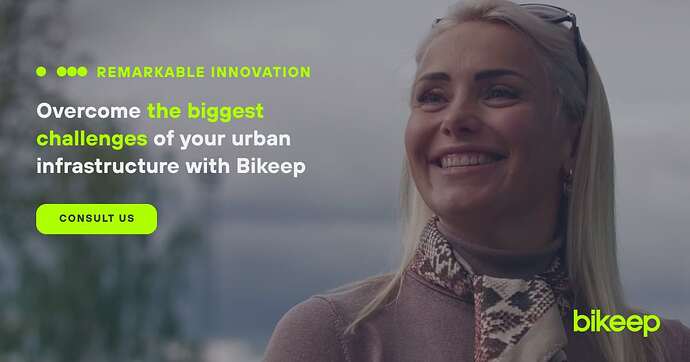 [Edit] in NZ they’re known as the LockyDock system

I’d love it if there were lock up cages available too, and would happily pay to use one. I’m going into town this evening for dinner and a movie with colleagues but will end up leaving my bike locked up in a basement at uni as I can’t think of anywhere in town I’d feel comfortable leaving my bike exposed for several hours.

Maybe a private business with a bit of squeeze space out their back alley or a vacant room could be persuaded to provide a user-pays lock up? Or an empty shop in town? It’s possible isn’t it?

Coming from someone who spent 8 years cycling in London, where leaving a good bike unprotected could result in it being stripped of parts, Dunedin feels very safe. The fact that most bike racks are of the “wheel bender” type, and people routinely use thin cable locks to lock expensive bikes suggests that bike crime is way below UK levels. Is this just my perception?

My worry is that the cost of cages and Locky Docks, both in dollars and space, would come at the expense of number of racks and number of locations. Would it not be better to have good solid hoops on every street corner than to have a handful of cages or docks?

I know I’ve already mentioned this to you directly Fraser, but Moray Place outside the Dog with Two Tails / Resistance Climbing Wall often has 12+ bikes parked nearby. Definitely room to remove a carpark and replace it with bike parking (of the hoop variety).

bike crime is way below UK levels. Is this just my perception?

I’ve recently returned from a stay in the UK. I was shocked by just how massive a D-lock I needed to secure my middle range bike in the streets of London. And that was just for protection in daylight!

After dark the lithium powered angle grinders hit the streets, and no bike is safe. Ever.

We are profoundly lucky in Dunedin to have such a small amount of bike crime. I suggest that we relish it and drop in hoops everywhere.

There is a need for bike parking outside more or less every coffee shop in Dunedin! I noticed it this morning at Fluid on Union street, but I guess we could generate a list of bars and coffee shops and simply delete the (few) that are near adequate bike parking

The DCC have erected this style cycle racks at the bottom of Dowling St - These have been correctly spaced and would provide good parking for a dozen bikes - a huge improvement on the “wheel-bender” style that we see so often in our city. 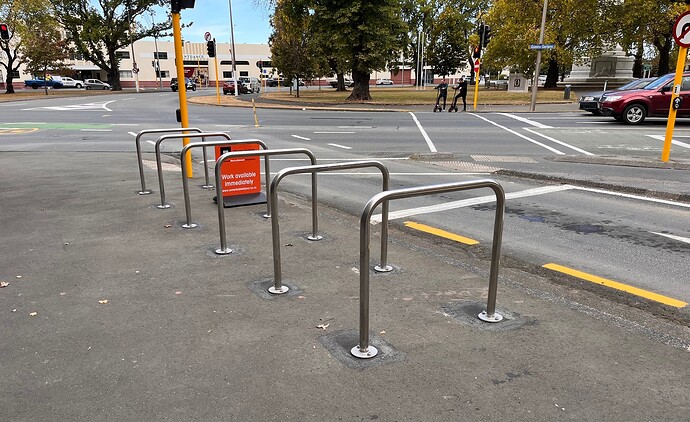 Those ones at the bottom of Dowling Street are pretty well used too.

On the 31st March I attended the “Bike Hub Investment Logic Mapping Workshop” on behalf of Spokes. The discussion was high-level on problems, consequences and benefits, but there was some discussion of types of bike parking. The timetable is to get the business case together by the end of July and implement in 2023.

A couple of interesting things were mentioned in passing, including