I found the following (2011) document “IMPLEMENTING LOWER SPEEDS IN NEW ZEALAND” an interesting read: 12637251_IPENZ2011-Koorey-LowerSpeeds-revised.pdf (271.6 KB) What is striking is that this document is over a decade old and nothing has really changed. About time it did.

In particular the following:

Aside from the above-mentioned school speed zones, the Rule also allows the possibility of using 10 - 40km/h limits. Here is the relevant clause:

3.2(6) A road controlling authority may propose to set a speed limit of less than 50 km/h… if:

Meeting requirement (a) is not likely to be difficult for locations where a lower speed limit is being proposed. The earlier discussion about speeds and safety make requirement (b) fairly redundant. All that remains therefore is for the road environment itself and the traffic behaviour to be assessed and if necessary adjusted to satisfy requirement (c).

A number of potentially suitable locations for such limits occur around schools and tertiary institutions, residential areas, parks and playgrounds, and urban CBDs and shopping streets.

So nothing stopping councils making 30 kph zones around schools they wanted to: The whole (and pretty pointless) “40kph reduction” school zones thing is bunkum.

Yes exactly! This is what we should be pushing for all the streets around the University. We should forward the report to Simone for discussion in our meeting next week.

We should forward the report to Simone for discussion in our meeting next week.

Can you share the meeting details and who is invited? Maybe in #members-only?

Where has the reform of the Land Transport Rule - Setting of Speed Limits 2021 got to? I understood that it was likely to tear up the old rules anyway?

The meeting is just for three of us: Matt for SDHB group, me for Spokes and Steve for BetterStreets. We will report back. Draft agenda is:

There’s a plan for an Albany Street cycleway? I’ve always thought a better location for a bike path would be along the roads beside the Leith.

Yes, the remains of a decimated tertiary district plan I believe. It does link up with the harbour paths and the tail end of the George st redevelopment… despite no plans to link the latter to anywhere really.

Matt and I made it clear that we felt if vehicle traffic was properly managed to avoid thru traffic, the need for a segregated cycle way would probably vanish. But that wasn’t on the cards.

We can update you after the meeting.

I think we really need to push this one. Rather than just waiting for Waka Kotahi to do something, we should create bold slow speed mixed use streets. I see no reason why the couldn’t be do very cost effectively and extensively!

Some info from the Global Street Design guidelines that the DCC have signed up to: 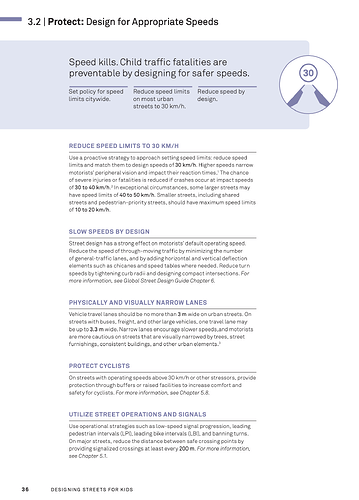 Where is this from, and what does “signed up to” mean to the DCC? Is this something we can try to hold them too, or just something aspirational that they’ll never concern themselves with? 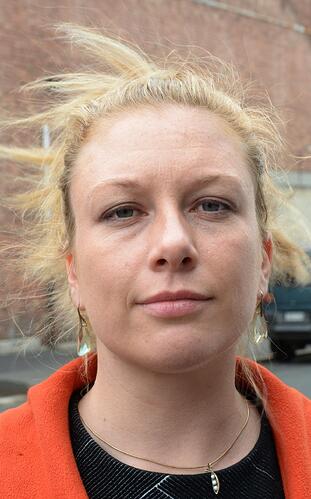 Dunedin has joined other cities both in New Zealand and around the world in endorsing the Global Street Design Guide. Councillors voted to adopt...

Good article in the paper today. They talk about the slower speeds and cycle friendly environments. Why is it then we can even start a conversation around this, and they would rather send all their time on very expensive and controversial projects like Albany St which feed into nothing! 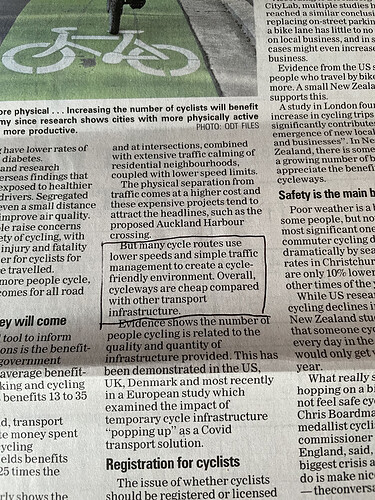 yes, agreed - great article in the paper. I am moving more and more away from separating cyclists from traffic - overall slower speed and more sharing space is what I would like to see around Dunedin.

Yes, we need to combine all our forces and submit to the proposed changes. This proposal also implies that the one ways will stay the way they are - and this is not really what we would like to see for Otepoti in conjunction with the new hospital.

30kph throughout Dunedin: It will happen one day, the question is when. DCC traffic people have been holding up the “we can’t impose it yet, but the rules are changing” for some time. The question is, now the rules have changed, will we see any progress? Or will we have to fight for every change as we have in the past.

The thing is, a city-wide 30kph (with enforcement) is the one solution that does not take away parking, trees, etc etc. 50kph should be allowed only on roads where there is infrastructure to protect cyclists and pedestrians, or, I suppose, better alternatives to using that road.

It will be interesting at the next Spokes/BUG/Betterstreets/DCC meeting to find out what steps are being taken to make use of the speed setting rule changes.

(Also: Whilst I’d like to see the one-way scrapped in favour of a (reduced junction) two-way sacrificial artery, I don’t think there is a single perfect solution. What does count most is what happens away from SH1: no point changing SH1 just to find the side roads all become rat-runs!)