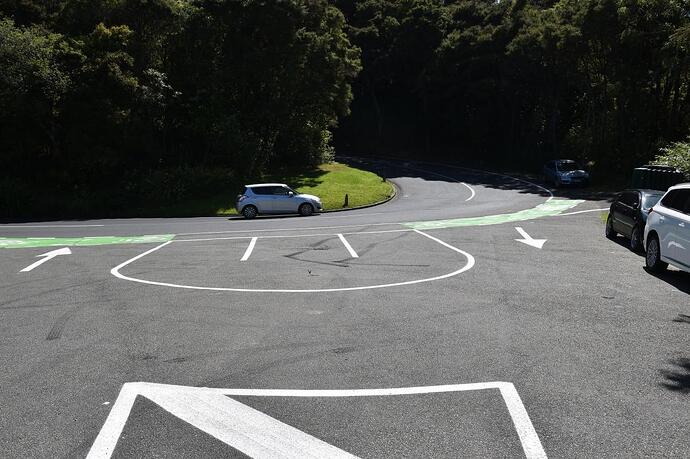 The Dunedin City Council says it is a work in progress, but new road markings in Lovelock Ave have revealed three new car parks around the entrance...

Anyone know anything about this. At the moment it is 15m of green paint, leading from nowhere to nowhere. It only makes sense if they plan to turn the existing pavement up to that corner into a shared path, and the path up to Opoho (a bit steep at the start). If this is the plan, I think it marks the first hill suburb to get connected to the city by cycling infrastructure, which would be great and offer a blueprint for other such routes.

Just confirmed this with a DCC Staff member: the footpath from Dundas to the cemetery entrance is the be a Shared Path for pedestrians & uphill travelling cyclists. From there “The path above the intersection is already a shared path, as all paths through reserves are.” As for timeframe, apparently the work is with the Contractor so just as they get to it now for the signage & paintwork.

However, those 3 carparks in the middle there are going to be in for an interesting time in winter. That’s the location of almost daily skid/slide marks when it’s icy - the camber of the road and corner angle means that if you lose traction in any way heading downhill, that’s the uncontrolled runoff path.

Your source of info is clearly better than mine: Jeanine Benson sent me a nice picture as to how the corner will look but without any info on the shared paths. I’m very pleased to hear the designation of the the existing footpath as being an (uphill only) shared path. This is exactly what is needed on Warrender Street and (I imagine) various other roads up to residential areas.

Wellington has some very well thought out hillside bike paths and shared pathways, so hopefully this is the beginning of a new stage for Dunedin. Despite the steepness, I think for many NEV and Opoho residents, these hillside routes offer a safer and more enjoyable biking route than going down North Road

Be nice to think it was a well thought out piece of a master plan, but it is certainly not part of any plan I have seen or heard about, despite our recent conversations with the Council trying to understand what a connected network might look like!

Went and took a look the other day.

It is only a tiny tiny piece of paint, so I don’t think that it is worth thinking about too much.

Yes, just paint, and probably only put there to “create” 3 parking spaces

It will become more interesting when (?if) they drop the curb on the pavement, since that would suggest they are serious about the pavement being an uphill shared path: I’d be very interested to see if the legal implications of this are surmountable.

Also does anyone know what prevents the cycling route officially going through the cemetery? It is the obvious (and widely used) route, but I can imagine there would be all sorts of bylaws preventing making it official and signposted.

what prevents the cycling route officially going through the cemetery? It is the obvious (and widely used) route

Good luck with that. We can’t even get a memorial wall built in East Taieri cemetery because of stupid regulations from DCC

Aren’t we talking about the path on the edge of the Cemetery? This is always open.

The path going straight uphill beside the cemetery is already a Shared Path, but a) the bars mean cyclists have a standing start at the steepest point, and b) damn that’s steep! Most people on bikes use the internal cemetery road that curves in then up, coming out onto the path by the water tower.

There is room to put separated up cycle lane on road with shared cycle/car lane down…as can be done on many of these hill roads!

There is room to put separated up cycle lane on road with shared cycle/car lane down…as can be done on many of these hill roads!

Can it though? I think it is a (relatively for NZ) narrow road.

What are minimum lane widths for NZ roads? I was wondering this whilst cycling up Warrender today., thinking that narrower lanes would at least slow drivers down a bit… especially if there were bollards involved!

The discussion in the Biking in Dunedin Facebook page about this:

The minimum width for a traffic lane is 2.5m and a cycle lane is 1.5m so 6.5m for cycle lane on one side. This road, above the new cycle lane is about 7m, and a bit more on the corners. So it can be done, and as you say narrowing the road slows the traffic do is a good thing in itself!

Update from the DCC:

We do need to do some vegetation trimming in this area.

The shared path signs have been ordered but haven’t arrived from the manufacturer yet. The new kerb crossing to access the footpath is programmed to be completed soon. Bruce has asked for this to be given priority.

Update from DCC: Yes, all still going ahead, but we have raised concerns about the current arrows on the green paint and need for signs to warn cars about cyclists on the “wrong” side going over that junction.