Seattle stopped requiring cyclists to wear helment last year, joining a whole bunch of places around the world who have moved that way: 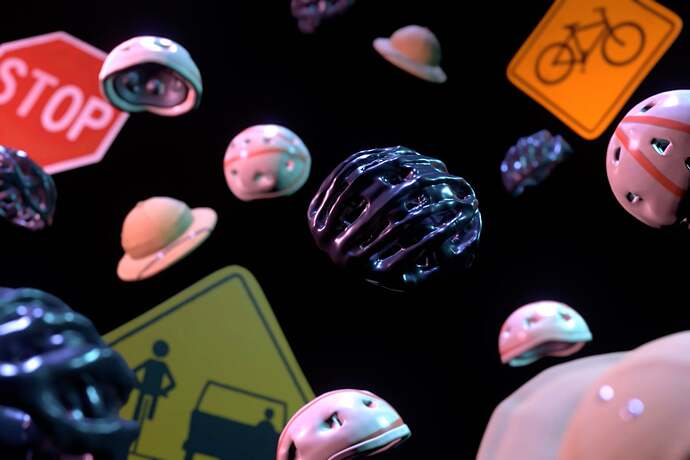 In the ’80s, We Decided Bike Helmets Make Riders Safe. Cyclists Have Paid for...

Some cyclists refuse to wear helmets on principle. They have their reasons.

I strongly believe that we need to do that here in NZ too, but regardless of the law I will continue to wear a helmet in high risk situations - i.e. serious mountain biking and when dicing with traffic.

The fundamental situation we see around the world is this dichotomy:

Yup, just like masks. Wear a high quality facemask properly, and your personal risk of spreading or catching respiratory viruses is very low. Mandate the population to wear masks - rather ineffective (and makes some people very mad).

Can we please drop the cycle helmet mandate?

I’d love to see that. Yes, as per current law, you must wear a helmet when on-road, but not necessary off-road. Whereas the danger is much higher off-road with sharp rocks / obstacles / falls etc than when pootling along a quiet suburban road. Not worth re-hashing all the arguments for/against: let’s just follow overseas best-practice!

I totally agree with the arguments brought forward. I had not even thought about the fact that potential riders might see it as an indicator of how dangerous cycling is because you have to protect yourself with body armour.

Maybe I should always wear a helmet now when walking around…

I would love the helmet law to go and actually quite often take my helmet off on Portsmouth Drive - so that is ok as it is off road?

Nothing more than a fleeting thought… I wonder if the airbag style helmet that looks somewhat like a scarf would be sufficient at scale, if enough people wore them to make people think helmets are unnecessary. Changing the visual perception first… The regulations to follow.

Kia ora Heike,
No - the definition of a road is quite broad. It includes any path with a common right of passage (i.e., you don’t have to wear a helmet on your driveway). For example, under the law, a beach is a road and you have to wear a helmet when riding on the beach. Whether a police officer would know that is questionable - and likelihood of enforcement is low. For anyone interested in more info, see: https://www.cyclehelmets.org/
Although I agree with your sentiment, I have little hope that the mandate would ever be lifted here. It took decades just to get rid of our ridiculous give way rule. The news media and the general public have completely bought into the idea that cycling is dangerous and why wouldn’t you require a helmet. The whole ACC thing would be brought up over and over - despite the fact that more people are injured playing rugby than biking and more people die swimming than cycling. Yet we don’t mandate safety gear for rugby and don’t require swimmers to wear life preservers or stay within particular areas. There is a great article on relative risk: How dangerous is cycling in New Zealand? - ScienceDirect

The whole helmet debate is a distraction from the real issues. That applies to people arguing against helmets as well as people in favour of them. Arguing about it makes us as a cycling community look divided and unfocused. In my opinion we should stop talking about it and concentrate on advocating for better infrastructure and separation from cars which are far bigger dangers.

I understand the arguments against helmet mandates, and I don’t think pootling along a flat cycle path without a helmet on is particularly dangerous. However I don’t understand why you wouldn’t wear one going down Dunedin’s hills or on the road. The same applies if you’re on a scooter or anything that goes fast down hills. what have people got against them? Is it vanity? Brain injury is not a good look either.

Helmets do not stop people dying if they are hit by a ute. They will do nothing for a crushed pelvis or chest or a broken neck. Lets focus on this. But they do help prevent some brain injury - so let’s not pretend they are useless because that makes us lose credibility. I know you guys are not saying they are useless in all contexts but people don’t understand the subtleties, they see it as for or against helmets. (As opposed to for or against helmet mandates)

Mandating seatbelts does not stop people driving cars, and it does not remove the need for speed limits and good roads. Places without helmet laws also have the same issues with victim blaming - being crushed by a ute was the cyclists’ fault for not wearing a helmet and dayglo lycra. Removing helmet mandates won’t fix this.

Opinion on mandates vs choice is a personal political thing. People are entitled to personal opinions but I don’t think the organisations representing us should get into this.

I think cyclists would get more support and more people cycling if we come across safety-conscious normal sensible people rather than appearing to push freedom at all costs.

Organisation like Spokes or Better Streets should be advocating for safety for vulnerable road users and encouraging active travel. We need to strongly emphasise that cars are dangerous, and advocate for infrastructure, speed limits, etc. and yes say that helmets are not the solution and do not remove the need for these. However if we say that people shouldn’t wear helmets, appear to be against public health measures and distracting people from the real issues we will lose credibility.

I welcome debate among individuals, but any organisation which starts speaking out against helmets will lose my support.

I’d never speak against helmets or people wearing them as they offer good protection in a number of situations, but would against mandatory helmet laws (perfect example of unintended consequences: good for the individual but not the population as a whole).

And a little Whataboutism: the logic & arguments for cycle helmets apply even more so for car drivers, but ….?

Hi Kate, it really wasn’t an argument, I thought. It is as you say individuals chatting.
I don’t think anyone is saying that this would be an organisation-level campaign? I agree with you that wouldn’t be a good idea.
Few people against mandates would “pretend they are useless” - and the subtleties need not be subtle. As I said before, it is unlikely to change in NZ and I agree with you that the real focus should be on safer streets - but at the same time it’s good to note that our national helmet mandate is an outlier internationally and that it has negative consequences principally making cycling seem much more unsafe than it is (did you check out the article about how safe cycling really is - I posted a link to it! very interesting!)

I agree “removing mandates won’t fix this (victim blaming, need for good roads)” but if it ever happened it would fix some other things.

Anyway, back to planning and designing safer roads

We’ve all had the ‘helmet’ debate for years and will continue to have them for years to come.

I see it as more of an intellectual aspiration about correcting a policy wrong, that to most cycling advocates in New Zealand and Australia is self-evident in its long term behaviour harm.

But this is really only a thing amongst ourselves.

The benefits of discussing helmet policy as a public narrative by advocates is weak (or harmful). The focus of CAN and Spokes is typically towards promoting safer infrastructure and better transport policy.

Thanks guys. Individuals chatting freely is good. I think we agree on a lot of points. And if we don’t, that’s fine too!

If I could wave a magic wand and have what I want? Difficult. Helmets do reduce serious brain injury. I don’t think there is good evidence that helmet mandates do harm. There were similar debate around seatbelts in cars years ago but seatbelts laws have clearly reduced serious injuries and death. The magnitude of effect for helmets is nowhere near as big, but is there. I am in favour of personal choice, but the consequences are not just for the individual but for society. I totally agree that it is illogical to mandate helmets on flat cycle paths or quiet roads but not when mountain biking. It is illogical to mandate helmets on bikes but not scooters. Pedestrians - no, injury patterns are different. Cars - tricky, seatbelts prevent a lot of head injury, if your metal cage is trashed you’re talking multi-system trauma not just head.

If I could have my way I think on balance I would mandate helmets on bikes. And also on scooters. Not because I want to restrict freedoms but because I want it to be normalised and not questioned. Much easier to get your teenager to wear a helmet if “it’s the law”. Motor bikes, quad bikes yes. Ideally off road too as this is just as risky if not more risky - but there are ethical issues with this. If someone chooses to do stupid dangerous stuff on their property like ride a dirt bike without a helmet can/should we make it illegal? I guess that’s why laws are limited to public roads. Penalties for not wearing helmets should be minimal (a telling off if that) whereas penalties for dangerous driving should be WAY higher - driving a car is a privilege not a right. If that privilege is abused it should be taken away. I would also mandate 30km/h speed limits in residential areas.

But this needs to be coupled with public education addressing the risks related to driving and to inactivity. Explaining the benefits of active travel, and that it is cars that are dangerous not bikes.

That’s just my opinion. It’s paternalistic, but as has been said people are rubbish at evaluating risk. And general public have no idea about the consequences of major trauma and head injury. We also hugely underestimate the risks associated with inactivity!

Just my personal opinion. Always interested to hear other opinions. My main concern is that the helmet debate distracts from the real issues. But just chatting here - no worries.

https://bmjopen.bmj.com/content/9/9/e027845 Evaluating the impact of cycle helmet use on severe traumatic brain injury and death in a national cohort of over 11000 pedal cyclists: a retrospective study from the NHS England Trauma Audit and Research Network dataset

From Biking in Dunedin (before I worked out how to turn off comments over there):

Yes. They should be strongly encouraged but not be compulsory. I understand that countries such as the UK have actually used nz as a case study of the counterproductive effects of compulsory helmet laws.

As a motorcyclist I have always appreciated my helmet, particularly that time I landed on my face at 100km/h. As a cyclist I have no problem wearing a helmet for similar reasons and it’s barely a consideration, I just strap it on whenever I go anywhere. Why wouldn’t you?

Things are moving on in places that don’t have require helmets, such as the Netherlands. Fast moving e-bikes are causing many accidents and injuries, and the infrastructure has not been designed for such a mix to speeds. It definitely isn’t a time to argue about helmets…and if we do start progressing any sort of network it needs to be designed for the multi-mode micro mobility future…not just bikes!