Cyclists in the middle

Musings on the coffee table 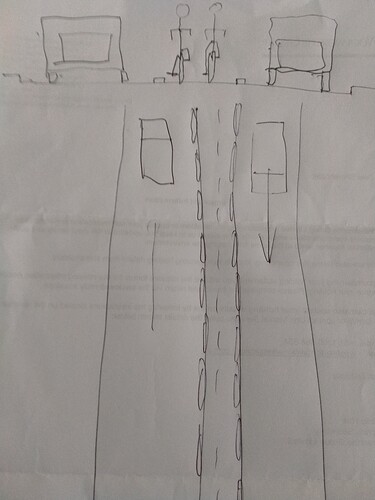 Hopefully you can see this

While I love the idea of being away from left turning cars and car doors / parking, it does expose novice users (thinking particularly children) to fast traffic and all intersections will be a bit curly.

Perhaps it is rethinking the protection measure like a barrier…

Dunedin is a tricky one with it’s relatively narrow streets

The center concept avoids opening doors. I was inspired by the posted article about why cyclist use the center of the lane.

Just fyi I went to post a photo directly but it said it was out of memory. I had to upload a photo as a workaround.

Yes, the junctions are the key issue. I wonder how BCN deals with them? I suspect there needs to be a light phase where all the cyclists move without cars.

Just fyi I went to post a photo directly but it said it was out of memory. I had to upload a photo as a workaround.

If you could upload successfully, this is probably due to your device / phone rather than the site. If it is a recurring problem we’ll sit down together and work out why.

What is BCN? Barcelona?

As previously discussed, I do think done well in the right place, it has real merit. The intersections is the area it is particularly useful as it can have a separate lane that is alongside the straight traffic. Ideally the right turning traffic is on an arrow so no mixing. It does need more room for the cycle lane though the intersection, so in many cases the straight and left turning traffic would need to share a lane, making it a bit tricky fitting the pedestrian crossing into the sequence. Perhaps a Barns Dance.

What if the cyclist wants to turn? Turning left would suck, and turning right poorly protected.

Barn dances work well when cyclists can go too; solves the turning problems. Still potentially stuck with bike congestion if some want to turn and some want to go straight (with cars).

I feel I really need to give it a go somewhere. Any idea where locally this has been tried?

To quote others, just highlight their text and click on “Quote”

Yes, maybe, but with a reasonable width bi-directional cycle lane there is a bit of tolerance for various situations

I’d love it if cyclists were legally allowed to cross barnes dances when the pedestrian signal is green. I very often jump off my bike for a moment and walk it across anyway.

I do this too. I’m always very aware that any “bad behaviour” on my part will be extrapolated into “cyclists in general” so I don’t do it unless I am in a rush or there is nobody around. (I learnt as a student in London that it is always worth checking behind you to make sure there isn’t a police car there before jumping a light :-))

I’d love it if cyclists were legally allowed to cross barnes dances when the pedestrian signal is green. I very often jump off my bike for a moment and walk it across anyway.

I confess to cycling slowly across Barnes dances as fundamentally it feels duplicitous to jump off my bike and run across. And the confusion regarding the legality of cycling on footpaths (against the letter of the law but not enforced) is a big factor too.

Cycling and the law Concepts

This article has highlighted that I currently brazenly break the law: It also highlights that the law is under review (which I didn’t know). The state of play is summarised here: We expect a Rule amendment to come into force in 2021. To support the changes, we will prepare an implementation plan that will include details of any transitional arrangements, and a national public information and education campaign. From https://www.transport.govt.nz/area-of-interest/walking-and-cycling/accessi…